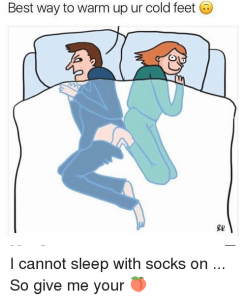 When 772 women were interviewed, researchers found that chilblains were more common in the damp, chilly North and Midlands than in the South of England, and that most sufferers were female. Women were six times as likely to have chilblains as their husbands or partners.
Raynaud’s disease is a disorder of the blood vessels in which small arteries that supply the toes and fingers suddenly contract in cold weather. While similar to chilblains, it is a separate condition.
Members of the Raynaud’s association were asked recently which alternative therapies had helped them, and some wrote glowingly of reflexology. This holistic approach, via the feet, would understandably be soothing to anyone with difficulty getting life into the toes.
https://ind.pn/2hBzcJs